I have joined Graphcore’s Oslo unit.

Expressed below are my personal views and opinions on what this is about.

Joining Graphcore is an opportunity to learn and work alongside a remarkable team trying to engineer the future of computing. Graphcore, with its systemic approach to engineering the building blocks of machine intelligence, presents a clear and empowering path for me to express myself. I also hope to do so together with research colleagues and friends (old and new), both in Norway and abroad.

It is no big secret that we are entering a new era in how we perceive and use computers for problem solving. People lucky to play a direct role in it potentially feel, to some extent, similar to what it may have been like during the intellectual ferment of the 1950s. While computing, or any other human capability augmentation idea for that matter, has always been about enabling us humans to approach and tackle hard problems collectively, the prevailing social and technological contexts let us reimagine problem solving and invent new tools serving this purpose. Back in the 50s, not much was in digital electronic form, which is something we take for granted now. It was all being built. The world is indeed different today. There is this ever growing blob of bits that encompasses Earth (for lack of a better way to put it), containing immense amount of knowledge and garbage, pertainnig to all that we have managed to model, simulate, and tool. Computers can now bootstrap from this, help us embrace complexity, enable new discoveries, and assist humanity in ways hithertoo not possible. This is a choice, and perhaps an easy one. But to do this effectively and meaningfully entails fundamental changes in the software and the hardware employed to process information. Graphcore is trying to go about this by working on both, putting together the building blocks of machine intelligence to expand the scope of problems humanity can solve1.

While the Brisol unit is designing, from the ground up, the processor for machine intelligence workloads, the Oslo unit focuses on building, again from the ground up, the networking and scale out infrastructure for these processors. This infrastructure is being built to support and discover machine intelligence workloads and algorithms that scale efficiently with compute. Imagine inventing methods the world has yet to see, and which bring orders of magnitude improvements in solving problems being tackled by our current AI enterprise. Far more importantly though, imagine methods that enable us humans to solve problems far beyond the capabilities allowed for by current hardware. The workload for machine intelligence is different from what the chip industry has evolved towards since the late 1950s. Whilst we’ve benefitted heavily from repurposing compelling developments that accelerate algebraic operations from companies like NVIDIA, the world is asking for something different. It needs compute machinery that is designed from the ground up for machine intelligence. This is where Graphcore comes in. 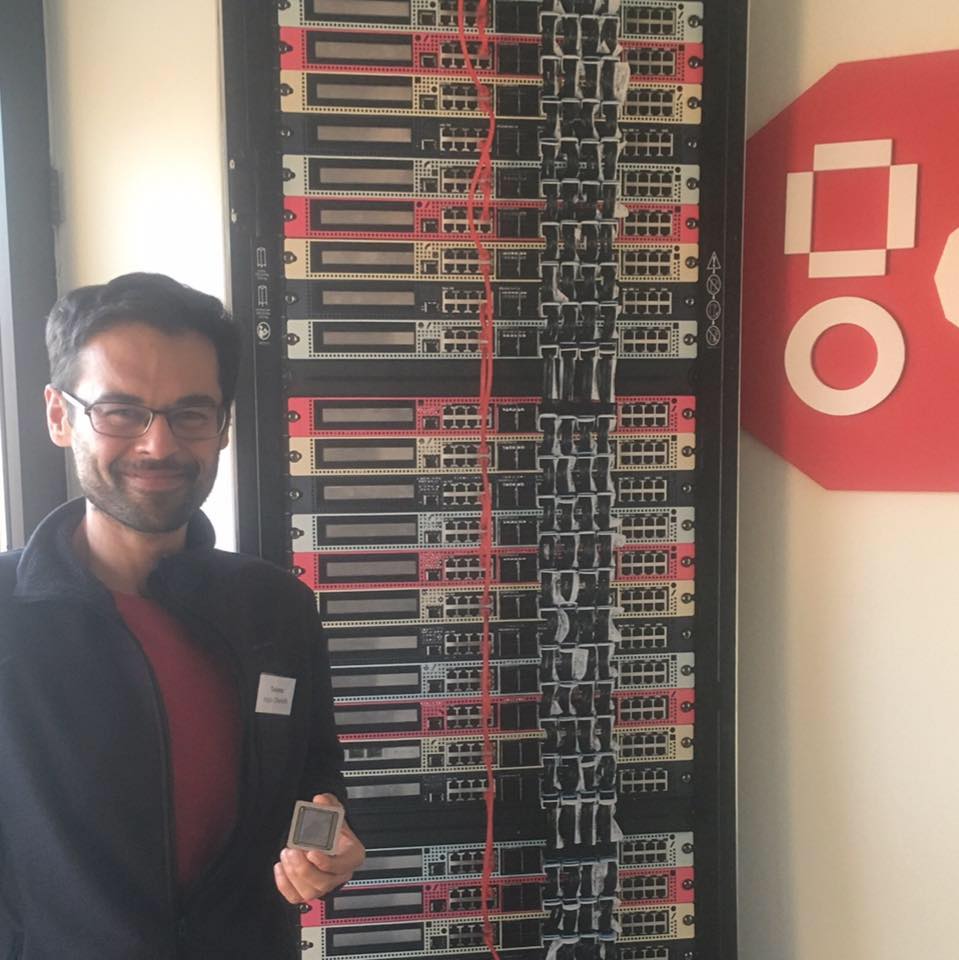 At the grand opening of Graphcore’s Oslo unit. Holding 23.6 billion transistors in one’s hands can clearly bring a smile on one’s face.

As lager and larger problem domains get tooled to produce ever more complex data, models able to handle this complextiy are also evolving, many of them working in parallel – somewhat of a necessity. Deep learning is a testament to this idea. In step, the world is steadily embracing machines that operate under a paradigm different from what made personal and cloud computing stand the test of time. This latter, time tested workload, relies on compute machinery that processes instructions in sequence, keeping a precise account of digital objects, e.g. documents, being processed. The workload expresses the nature of computer programs written for automating and managing scientific, business, engineering, design, art, and recreational endeavours, without much recourse to harnessing the amount and kind of data the world generates today. It also expresses programs that enable humans to symbiotically interact with computers and with each other. The people who championed the building blocks – the dream machine – serving this workload, invented the present day a few decades ago. These were the pioneers of computing, spearheaded by the likes of J. C. R Licklider, followed by Bob Taylor at the sotried Palo Alto Research Center (PARC), with Bob Noyce simultaneously cultivating the spirit of invention at Intel, modestly stamping silicon in the valley. Do read this book, if and when you get a chance, to learn about serving a dream tailored to expanding human potential through technology.

The intelligence workload, as I personaly see it, and this is subject to change, expresses programs that make machines learn from a pleathora of experiences, including from interactions with each other, and lets them adapt to changing circumstances. Machines have to complement each others’ strengths and weaknesses whilst dealing with uncertainty and changes in the dynamics of the world they operare in. This requires machines to discover structure contained in experiences, continuously distilling discovered knowledge in models of the world and of themselves, and using these models for decision making/operation in concert with the ecosystem they are situated in. Knowledge structures, indeed those that take inspiration from nature, rely on interconnected self-organising computational processes and abstractions that exchange information and operate in parallel, producing decisions adapted to and/or which adapt with the task at hand. The programs that the workload expresses have far greater degrees of freedom and built in redundancy, than the other, more mature, practice. These programs can express ideas and solutions us humans may not have happened upon when dealing with problems at the frontier of knowledge. They can thus reveal promising uncharted paths to solutions, in turn solving problems or making them approachable, advancing our intuition, and expanding our creative capacities in the process. These programs also enable autonomy in machines, allowing them to adapt to our needs. The world is in need of a place that champions the building blocks for the workload expressed by these kinds of programs. It needs a place that reaches out to the PARC of Bob Taylor and the Intel of Bob Noyce, and take on the responsibility for bearing the torch that carved computing history.

Graphcore is a good candidate for bearing this torch. It is building the general purpose programmable machinery for the evolving intelligence workload. Importantly, it is working on the system as a whole, which includes the processor, the scale-out machinery, and the software tool-chain, which would enable us to create the next generation of machine intelligence for tackling hard unsolved problems with greater resolve. Graphcore is on a mission to accelerate the shift in paradigm that the world is embracing.

If you want to play a meaningful role in engineering the future of computing, and care about expanding the scope of problems humanity can solve whilst at it, do get in touch. Graphcore is hiring! Check out these videos to hear more about working at Graphcore from some of the team.

Let’s build the next dream machine together.